Workshop on “Handover the obtained project results for Nam Dinh” 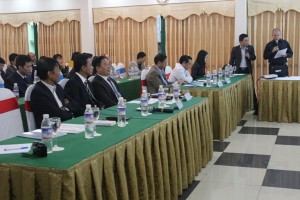 On November 19, 2013, at the Vi Hoanghotel in the Nam Dinh city, the Federal Institute for Geosciences and Natural Resources (BGR), Germany in collaboration with the National Center for Water Resources Planning and Investigation (NAWAPI) organized a Workshop on “Handover the obtained project results for Nam Dinh province“. Vice Minister Nguyen Thai Lai – Representative of the Ministry of Natural Resources and Environment, Mr. Nguyen Viet Hung – Vice Chairman of Nam Dinh Provincial People Committee and representatives of the relevant agencies and media have attended the workshop.

The IGPVN project initiated and implemented since 2009 in Nam Dinh Province hasup til now completed its objectives and tasks for Phase 1 and is implementing Phase 2 in various provinces including Ha Noi, Ha Nam, Soc Trang and Quang Ngai. Brief introduction about the IGPVN project by Sir Jens Boehme – Project Leader has brought a panoramic view of the IGPVN project activities, the role and significance of groundwater monitoring and the need to enhance cooperation among relevant stakeholders involved in the field of water resources. According to Sir Jens Boehme, some necessary operations have also been deployed to prepare for the next phase, from 2015 to 2016.

The scenario analysis results of groundwater abstraction in Nam Dinh had a direct impact on the perception of authorities as well as other stakeholders involved.

The maintenance of current groundwater extraction rate will result in groundwater depression and depletion. Groundwater level drawdown can only be prevented or mitigated by stopping groundwater abstraction or maintaining a stable abstractionrate.

The signing ceremony of handover the project results between NAWAPI and Nam Dinh Donre took place in the presence of the representatives ofMONRE, the IGPVN Project Leader and representative ofNam Dinh Provincial People Committee.

Speaking after the signing ceremony, Vice Minister Nguyen Thai Lai emphasized the role of water resources as well as water resources management in Vietnam in general and in Nam Dinh Province in particular, where groundwater resources is currently facing overexploitation and complicated saltwater intrusion problems. He also asserted that Nam Dinh is one of the few provinces equipped with modern, high quality groundwater monitoring network, and it is necessary to maintain the operation and promote the effectiveness of this monitoring network. The proposal of Dr. Tong Ngoc Thanh to urgently implement the planning of water resources exploitation and utilization in Nam Dinh Province was also approved by the ViceMinister.