On June 17 and 18, 2019, BGR representatives attended a series of events to evaluate the implementation of the Government’s Resolution Nr. 120 on the sustainable development of the Mekong Delta.
In the afternoon of June 17, the BGR Project Leader participated in the Ceremony for handing over various natural resources and environment products to 19 provinces of the Southern Plain, chaired by MONRE Vice Minister Le Cong Thanh. 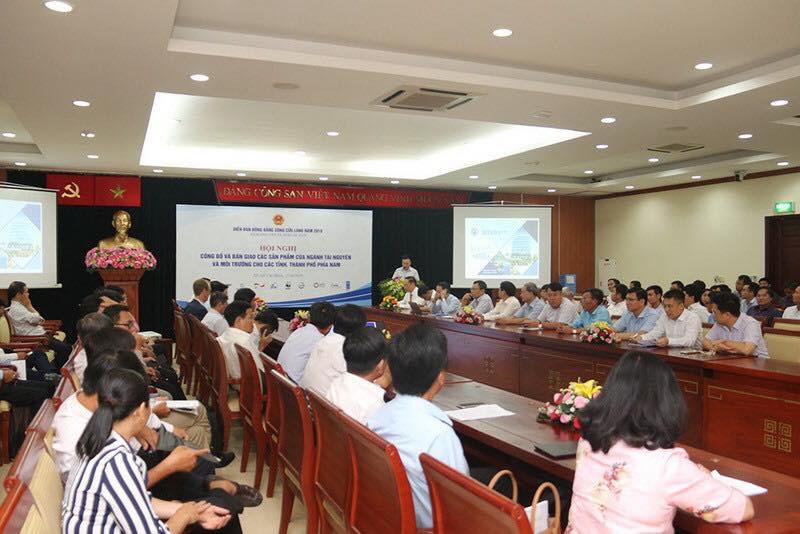 The ceremony was attended by 300 delegates and leaders from the Southern Plain, including 13 provinces in the Mekong Delta, as well as various MONRE departments.
At the Handover Workshop, different institutions presented their most updated project results on the water-related topic. The presentations included: “Monitoring and observation of water resources in the Mekong Delta region” by NAWAPI; “Land subsidence monitoring results in the Mekong Delta and Ho Chi Minh City” by the Department of Surveying, Mapping and Geographic Information (DSMGI); “Operation and Development of the Southwest Region Environmental Monitoring Station for environmental assessment, warning and forecasting” by the General Department of Environment; “Meteorological and Hydrological products in service of socio-economic development for the Mekong River Delta” by the General Department of Meteorology and Hydrology. Remarkably, the results monitored by DSMGI showed an alarming subsidence rate in the last 12 years with an average of 1cm/year. These figures agree well with the InSAR data recently collected by BGR and GIZ.
Together with NAWAPI’s products, a set of IGPVN project reports including detailed hydrogeological investigations on the project areas, guidebooks for the implementation of the water resources regulations, the BGR Publication on Groundwater Management in the Coastal zones and other publications for awareness raising were handed over by the Vice Minister to the 13 Mekong Delta Provinces. 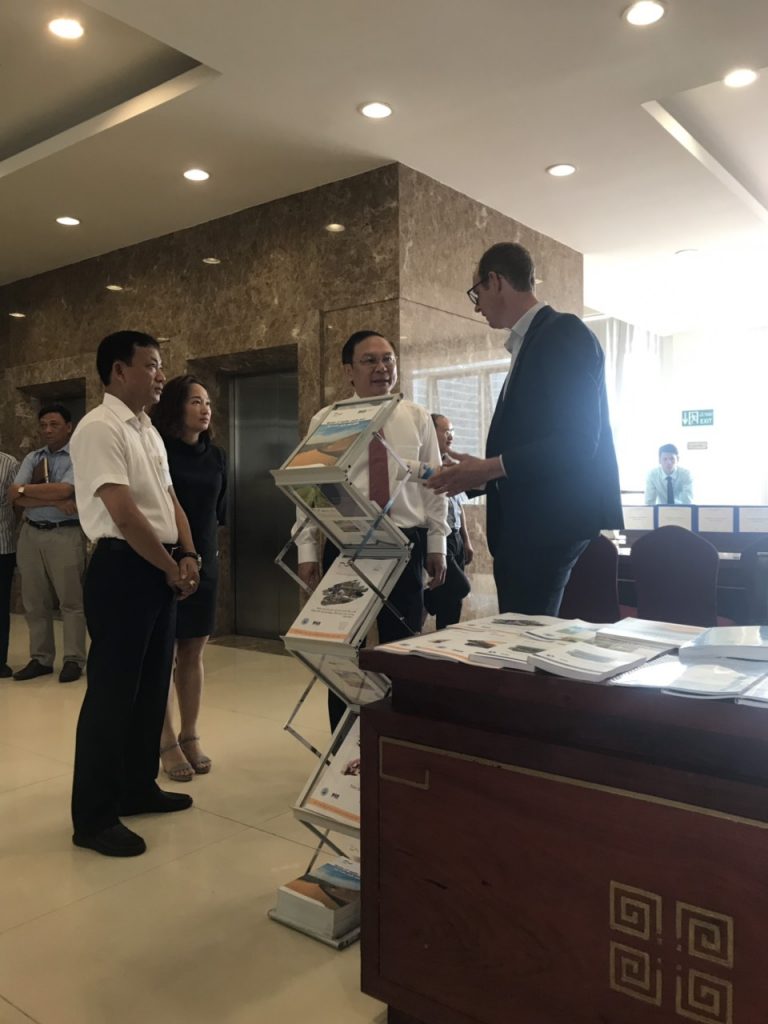 Before the plenary session in the afternoon of June 18th, four parallel forum sessions chaired by different Ministries took place. BGR has participated in Forum 1 on “Management of water resources, floods, saline intrusion, response to erosion and subsidence in the Mekong Delta” by the Ministry of Natural Resources and Environment in coordination with the Ministry of Agriculture and Rural Development, local authorities and international development partners. Among 17 presentations and speeches from various organizations, BGR has presented the messages by the Donor community relating (ground)water management and the current issue of land subsidence, which has attracted critical attention from the MONRE, local authorities and the other audience. 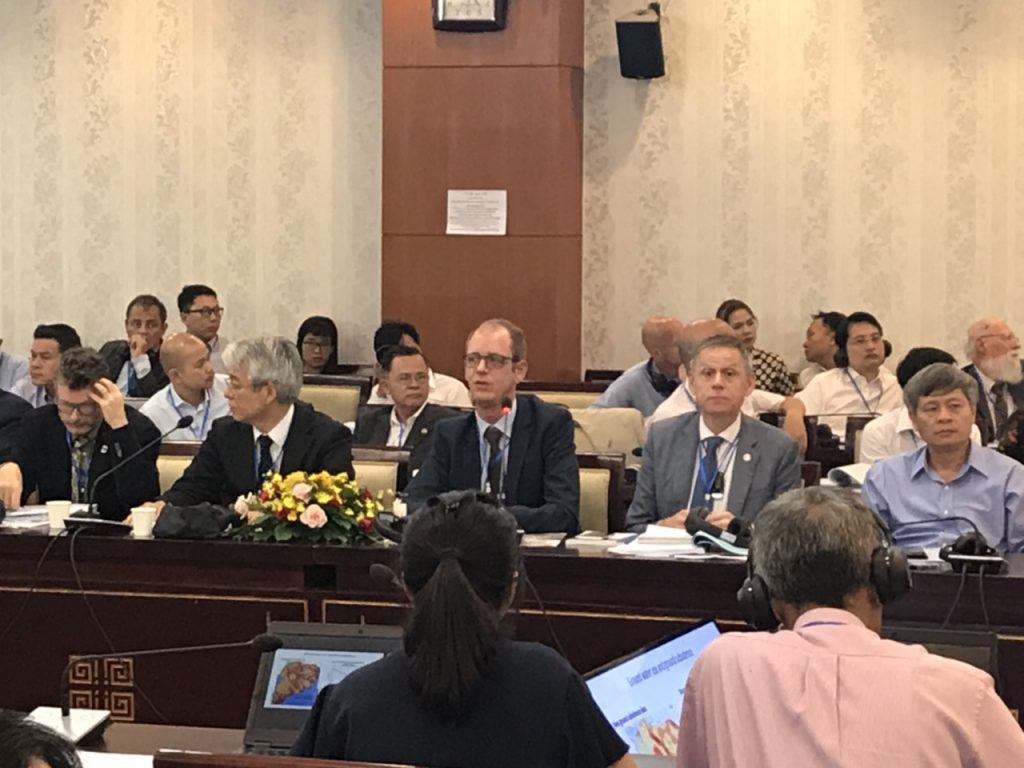 In the afternoon of June 18th, the Prime Minister chaired a plenary session to evaluate the discussion results. The Prime Minister affirmed that the issuance of Resolution 120 marked a major breakthrough in thinking, shaping the sustainable development strategy of the Mekong Delta with a comprehensive approach, integrating socio-economic development with long-termed vision, strengthening connectivity among the provinces, ensuring inter-regional and inter-sectoral focus through the coordination mechanism. After 2 years, the Delta has achieved good progresses and the Government appreciates the efforts of local governments as well as the assistance of international organizations for the region’s development.

However, he also admitted that there remain still many obstacles to be overcome, including poor regional coordination and linkage, non-synchronous infrastructure investment and no effective connection between Ho Chi Minh City and the Delta.
At the forum, the head of the Vietnam Government also proposed solutions to implement the Resolution in the coming time, including priority sustainable projects of regional scale.
In the past two years, the Government has approved a number of policies, including Decision 417 concerning the National Target Program to Respond to Climate Change and Support Climate Change. The program favors a number of projects and plans for a sustainable development of the Mekong Delta, such as embankment of residential areas in flooded areas for eight provinces and cities namely Dong Thap, An Giang , Kien Giang, Long An, Tien Giang, Vinh Long, Hau Giang and Can Tho City in 2018-2020. Notably, the Prime Minister has approved 28 projects for the Delta relating to the construction of sea and river dykes in the critical areas; planting, rehabilitating coastal mangrove forests and building saline prevention systems for the coastal provinces. The program has been allocated a budget of VND 3,700 billion for implementation.