The Awards Ceremony was organized by the HCMC University of Sciences on 4th November 2016. BGR VN team, representatives of NAWAPI, CTU, HCMC UNRE attended the Ceremony.

The idea of this contest was fixed after several working meeting with each of the three Universities since middle of 2015. A Contest frame was agreed among BGR, NAWAPI and the three universities  (http://igpvn.vn/university-student-contest/?lang=vi ). The best 4 projects were selected by the Organization Committee, and were awarded the MONRE Certificate of merit on October 3rd, 2016 at the VACI Conference (http://igpvn.vn/vaci-2016-and-the-awards-ceremony-protect-groundwater-the-treasure-of-life/?lang=vi ).

As agreed by the Organization Committee, an Awards Ceremony at University level was held by the HCMC US at their campus at 227 Nguyen Van Cu, HCMC on November 4th, 2016. 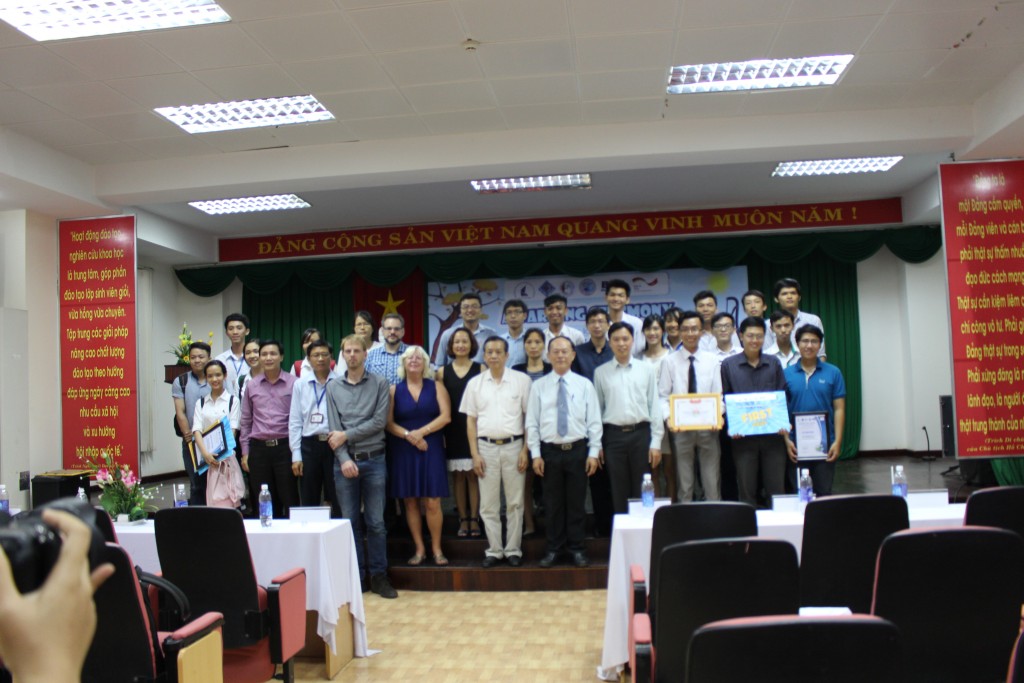 Giving opening speeches at the Awards Ceremony, NAWAPI Vice General Director – Dr. Nguyen Chi Cong as well as HCMC US Vice President  – Dr. Nguyen Kim Quang emphasized the importance of awareness raising in water resources sector and such contest for university students were really helpful. On this occasion, Dr. Cong did deliver a message to the students who had already taken part in this contest: please spread out the influence of this contest to the other students from other departments, school and to the community.

IGPVN Project Leader – Mrs. Dorit Lehrack briefly summarized the purpose of this contest and explained why it focused on the university students.

The best 3 projects of each university were awarded the certificates by Mrs. Dorit Lehrack and the representatives of the corresponding university.

– Huynh Ngoc Thai Anh and his colleagues: Green View Water – Application of IT in Groundwater Communication

– Phan Ky Trung and his colleagues: Assessment on the vulnerability of groundwater in the coastal line of Mekong Delta and proposal of solutions for community awareness raising

– Le Hoai Han and his colleagues: Collection of rainwater to recharge Groundwater at family-scale

– Tieu Van Sang and his colleagues: Design a groundwater treatment plant for a district of 45,000 people in HCM City

The most expected part of the Awards Ceremony was the conversation between Mrs. Dorit Lehrack and the students. Dorit briefly mentioned about the Creative Thinking which was delivered to the students before as a preparation step for them to take part in this contest. She then opened the door to Optimistic Thinking by asking the students what came into their mind when they fail an exams. The important thing is to see the opportunity under any circumstance and turn it into your own opportunity. In fact, her talk helped to bring confidence to the students who had not won the prize in this contest.

Answering the questions from the students concerning about the next/other contest organized and sponsored by the project, Mrs. Dorit Lehrack confirmed the need of such contest as a platform for the students to express their ideas and creativity; however, due to the limited resources of the IGPVN project, any continuation in organizing such contest need to be confirmed and committed by the project partner – NAWAPI. Right now, an evaluation of this contest should be proceeded.

Several remarkable side activities were organized by the HCMC US on the same day: