Workshop: Handover of the Igpvn’s obtained results to Quang Ngai 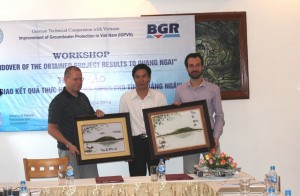 More than 30 participants representing for Quang Ngai DONRE including the DONRE’s leader, Desk for Water Resources, Minerals and Meteorology, Center for Geodesy and Monitoring, Sub-Department of Environmental Protection; NAWAPI leader Dr. Tong Ngoc Thanh and Dr. Vu Thanh Tam – Vice Director of the PMU as well as BGR Experts and IGPVN-Team have attended the meeting. 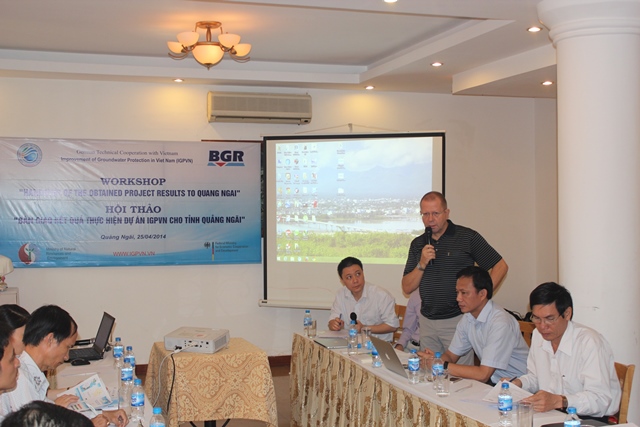 Project Leader Mr. Jens Boehme has a short speech in which he stressed the importance of the monitoring network and the use of data for decision making process. He advised the province should have more investment on Regular-based monitoring and avoid any pollution to waters.

Dr. Tong Ngoc Thanh assessed the risks of pollution to water resources in Quang Ngai. The water resources in Quang Ngai is typical for the Southern areas of Central Region. Quang Ngai is situated in the area endowed with short rivers, steep terrain, shallow sedimentary coastal plain, little volume of surface water, shallow-thin aquifers which are fluctuated to the rain water and therefore vulnerable to pollution. Dr. Thanh also reconfirmed that the operation of the groundwater monitoring network which has been built by the Project is crutial for the management and protection of water resources. He hoped with the trained staff that IGPVN has strengthened, Quang Ngai can be able to operate the network and use the data for better management of the groundwater resources.

At the workshop, IGPVN Technical Team has also presented their approach, procedure and major results of the project works in Quang Ngai. 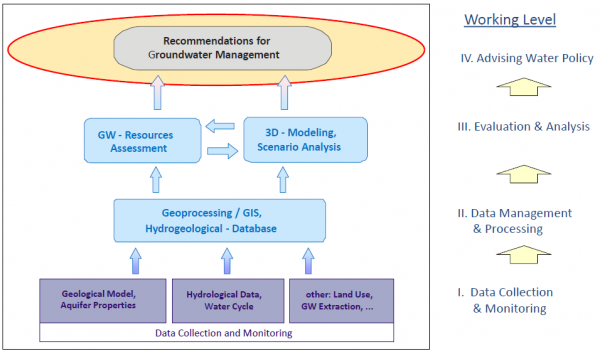 The Figure describes one of the IGPVN approaches. Four working levels are required for any good management including monitoring and data collection, data management and processing, evaluation and analysis and advising on water policies. Though IGPVN has not yet completed all the steps, it is yet the chance for Quang Ngai DONRE to continue and improve their capacity to manage the model by themselves. It is important that the DONRE is aware of the situation and ready to deal with it by themselves. That is also the intention of the IGPVN. 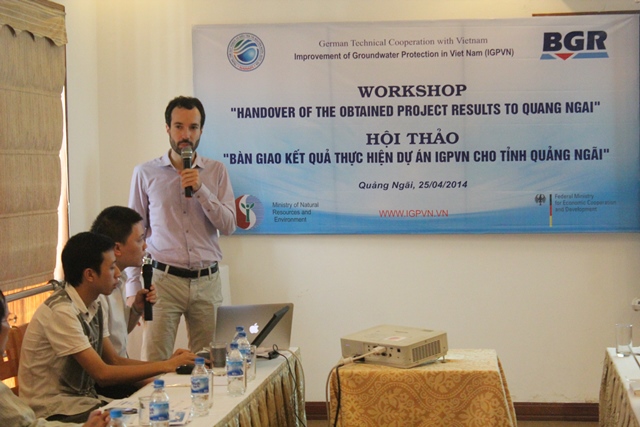 In the witness of all the participants, representing for IGPVN project, NAWAPI General Director and Vice Director of Quang Ngai DONRE have signed in the Memorandum of Understanding in which specifies the major project results, list of equipments and the monitoring network. Those results will be now officially under the management of Quang Ngai DONRE.

On behalf of Quang Ngai DONRE, Mr. Phi Quang Hien expressed their sincere thanks for the contribution of the project to the Province. DONRE Quang Ngai commits to continue operation the monitoring network, making good use of the project results and improve their capacity for better management of the groundwater resources in the province.