Pumping and tracer test in U Minh

On the first day of the year 2017, the pumping and tracer test in U Minh has been successfully completed, which made an important milestone in the hydrogeological research cooperation in frame of the project “Improvement of groundwater protection in Vietnam” (IGPVN).

The pumping and tracer test took place over the course of 18 days, including the continuous pumping of water from the central well IGPVN1 and measuring the water level at the 4 other observation wells (from IGPVN 1.1 to 1.4). When water level in the pumping well reached steady state, the Tracer Amino-G-acid was injected into the IGPVN 1.1 and Fluorescein into IGPVN 1.4 at the depth of the screen (from 161 to 197 m below ground level), into the aquifer n22. These two monitoring wells are located at a right angle in relation to the pumping well. Their  distances to the pumping well are 10 and 23 m, respectively. 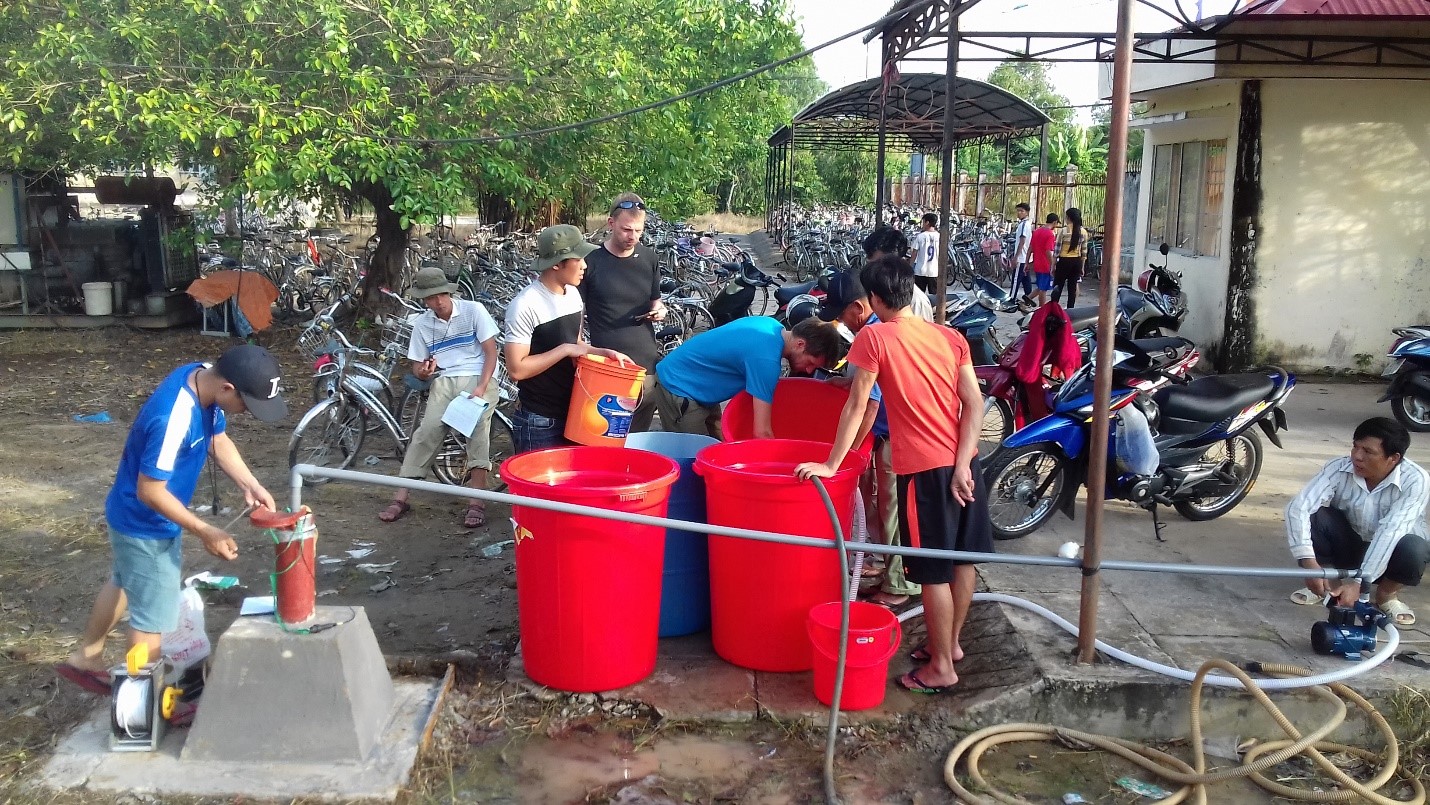 Injection of the tracer to the monitoring well

The pumped water from the well was connected to a fluorometer, which measures the tracer signals and sends them to the data-logger. The result of the tracer concentration is exported and shown on the computer screen. In parallel, water samples were also taken every hour for reference. The total number of samples taken was 324. These water samples will be sent to the laboratory at BGR in Germany for tracer concentration analysis. In addition, samples for chemical composition and stable isotopes composition were also taken from the target aquifer. 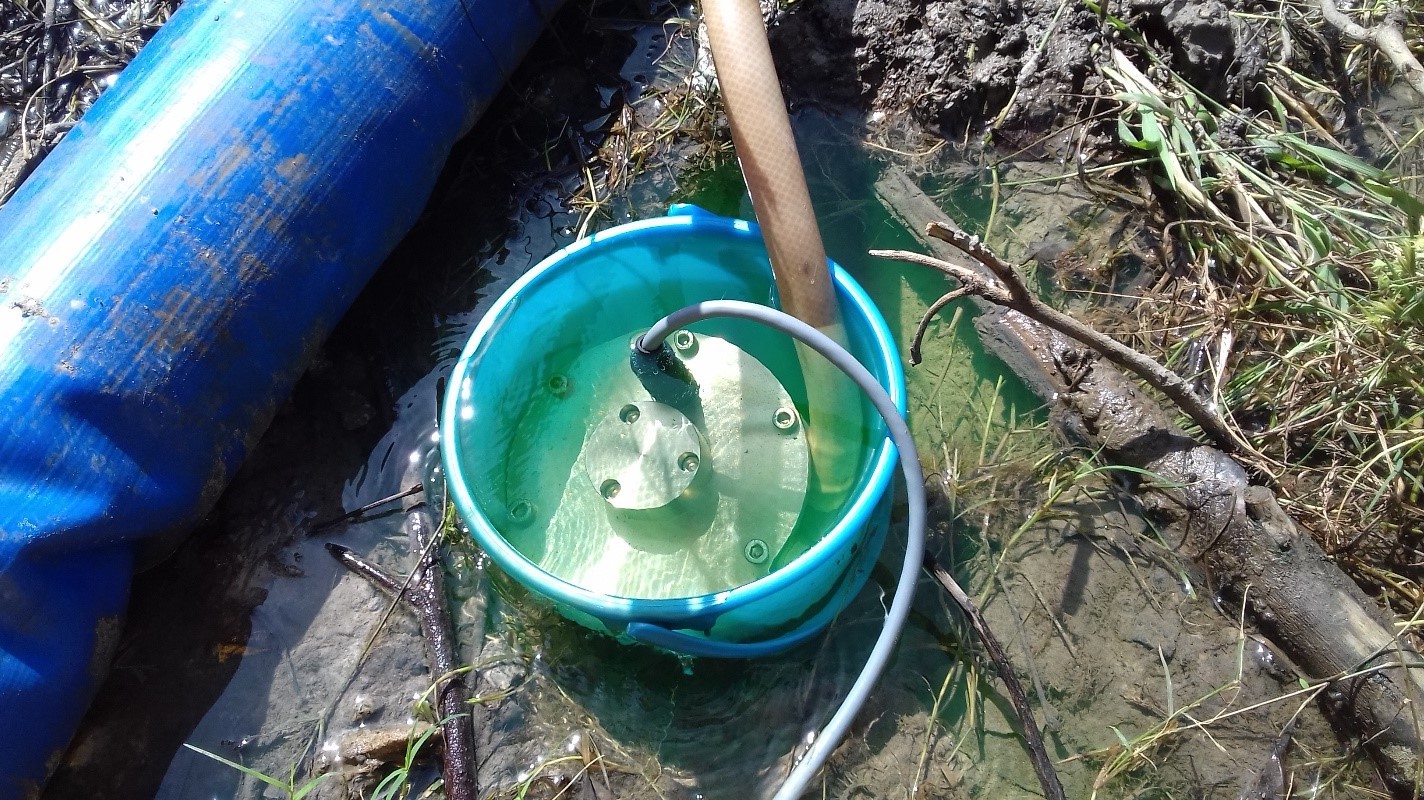 Measuring concentrations of the tracers with a Fluorometer device

The concentration of the retrieved tracer Fluorescein was 86%, which ensures the objectiveness of data as well as meets the initial expectations. The measurement of water level in the wells was carried out subsequently for three days.

In addition, during pumping, pH, electrical conductivity (EC) and water temperature values were also measured using WTW multi-parameter device. An EC data-logger was used to monitor the EC at the screen well of IGPVN 1.2, at depth of 130 m in the qp1 aquifer.

The field data for the tracer test using Fluoroscein was very satisfactory. However, for Amino-G-acid, the result of analysis in the laboratory are necessary as the fluorometer could not properly detect this tracer because of high background values and interaction with the Fluorescein signal. The results from the tracer test will help calculate hydraulic properties and provide information on the groundwater resources of the studied area.

During the test, a training on pumping and tracer tests was also conducted by the German experts for the engineers of the Division for Water Resources Planning and Investigation for the South of Vietnam (DWRPIS). After the training, the engineers were able to operate the field equipment. They are confident to carry out similar tests by themselves in the future. 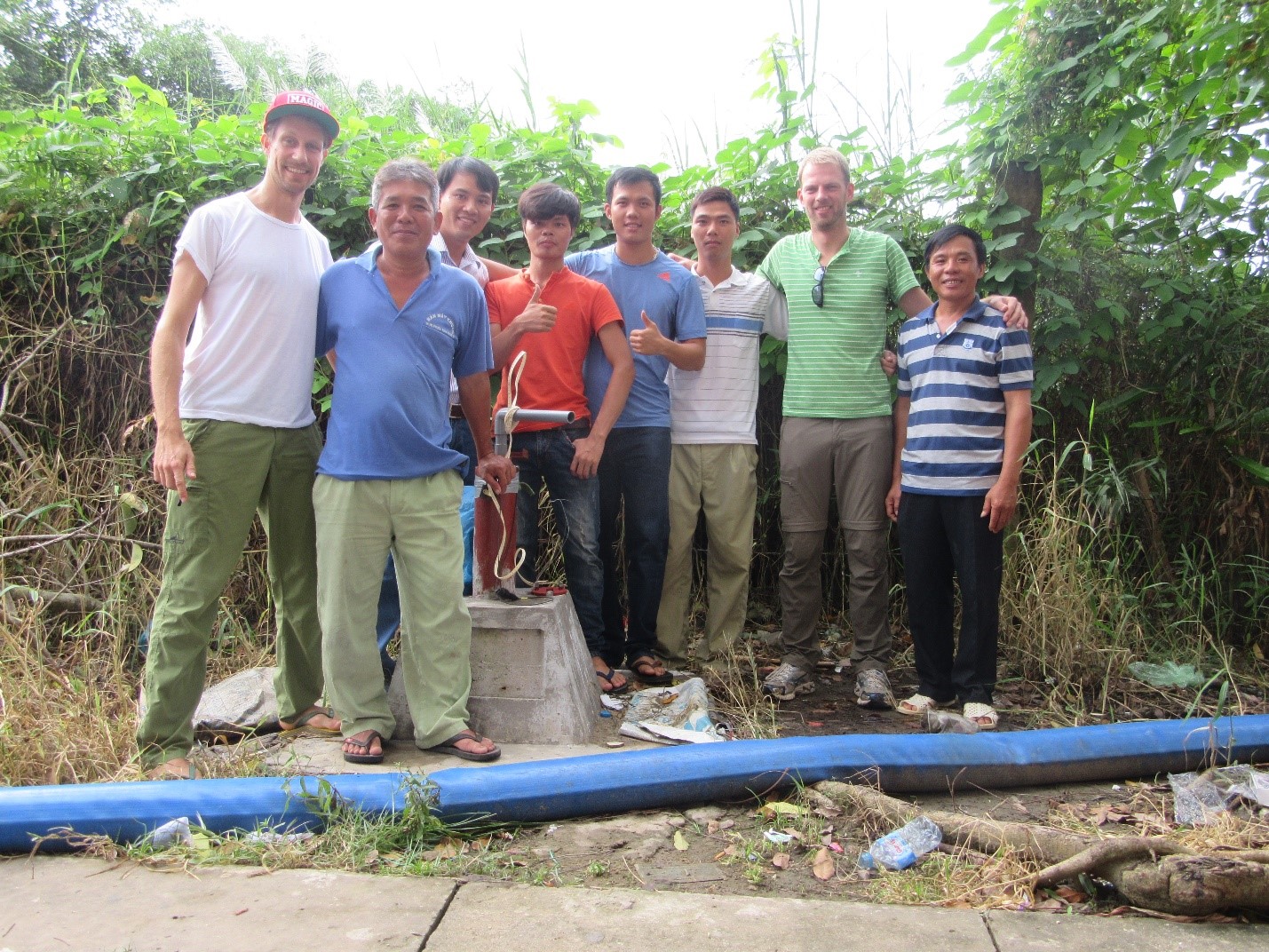 The team working on the pumping and tracer test

Last but not least, IGPVN would like to express our gratitude and appreciation to those who have supported us wholeheartedly for the success of the test. We are grateful for the support of Ca Mau DONRE, the People’s Committee of U Minh District and the teachers and pupils of the Nguyen Thai Binh Secondary School, who have offered us the most favorable conditions to carry out the test. In addition, we also send our appreciation to the DWRPIS and the National Center for Water Resources Planning and Investigation (NAWAPI) for the cooperation in the field, with special thanks to the onsite team.